These two blocks are the start of an applique quilt that featured in Annette Gero's book The Fabric of Society, the pattern was designed by Kim McLean. My original intention was to make two quilts - one in reproduction fabrics and the other using Kaffe Fassett Collective fabrics, but when I finally decided to start, I had second thoughts about making two quilts so I'm making it with KFC fabrics as I have a much larger stash of those fabrics than reproduction fabrics. 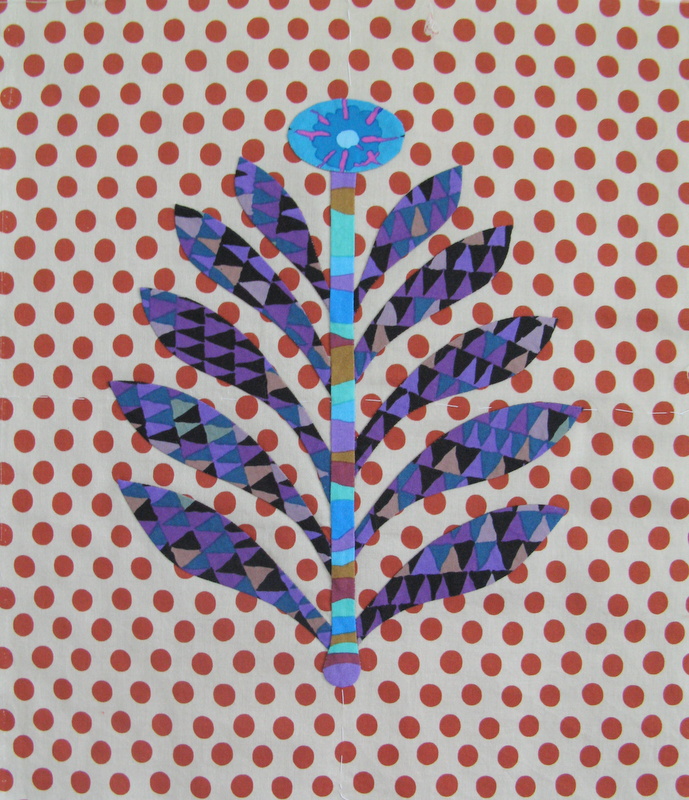 I quite liked this Spot fabric that I used for the Tree block but seeing it here the leaves seem to disappear a bit.  The fabric background is actually a pale grey with a brown/rust spot overlaid so I will need to take a bit more care with my fabric selection for the next Tree blocks. 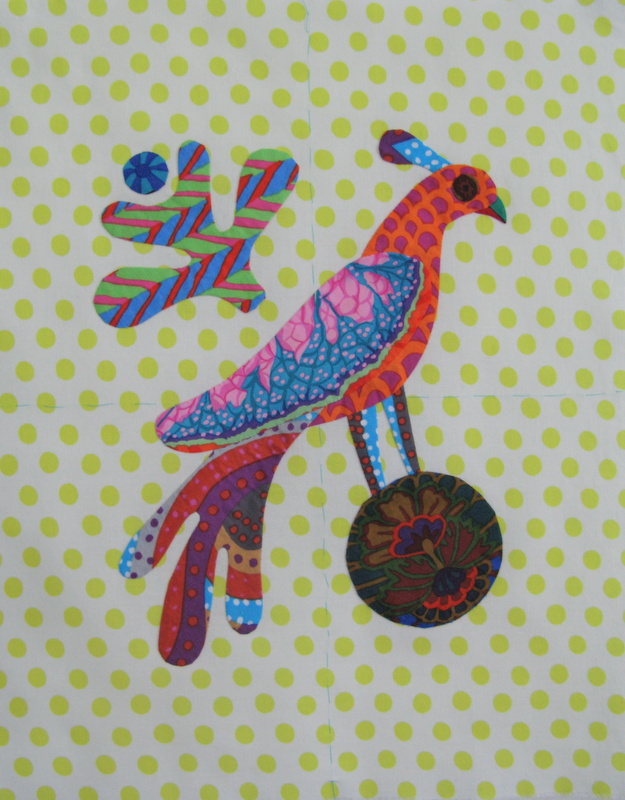 But wait there's more - each block has another piece of fabric on top which is then reverse appliqued into an oval shape, kind of like a picture frame, I can already imagine several fabrics that I will use for this part, I'm looking forward to making this quilt.
Posted by Pip at 7:10 PM 4 comments: 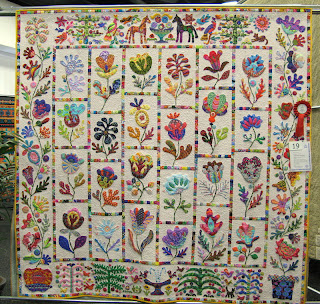 I have to thank Sheila for pushing me along on this quilt, I don't think I would have finished it otherwise :) and I would also like to thank Kim for designing such a lovely quilt, it had many lovely comments at the show, and also thanks to everyone who comments on the blog, it really makes a difference, knowing that others are following the progress.
Posted by Pip at 8:32 PM 13 comments:

It's been a long time since I (or anyone) last posted, I have been quilting away madly on my Flower Garden and I am pleased to say that the quilting is almost completed.

It took me ages to decide how to quilt this, I don't have much free motion quilting experience so it was easier for me to do a sort of flowery stipple/meander over the background fabric.  I used Wonderfil Decobob for the top thread and The Bottom Line by Superior Threads for the bobbin, both are quite fine so any thread buildup wasn't too noticeable. 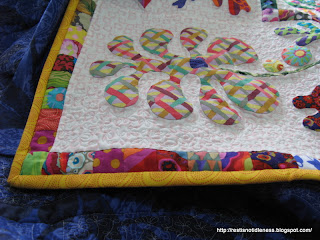 After reading this blog post on Sandra Leichner's blog I thought that her method might work with this quilt, even though there are a lot of large appliqued pieces in this quilt,  and it has worked quite well although some of the larger pieces have a bit of "bagginess" in them.  If I were to do this again I would put an extra layer of batting under the larger shapes so I could do some cutaway trapunto, that would take care of the bagginess I think. 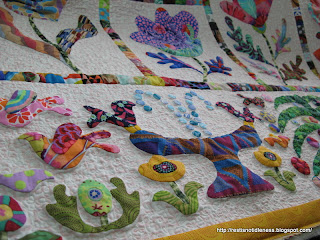 The binding is on but still needs stitching to the back, I do a little bit on that at the end of each day.  I'm currently doing all the outline stitching around each applique piece, I have 16 days left before the quilt must be finished for our guild quilt show.

The flimsy is finished .... 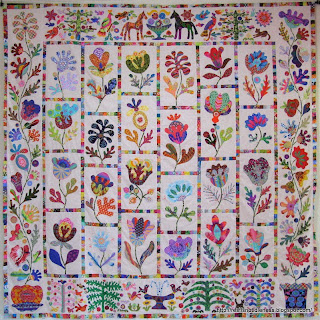 now to spend a bit of time trimming threads,
removing cat hair etc etc, then onto the quilting.
Posted by Pip at 3:42 PM 13 comments:

As promised, here are the photos of the Right side border.  I started this border from the bottom and then worked my way up, adding in the bias stem as I went. 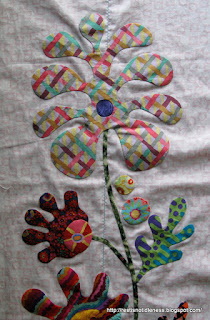 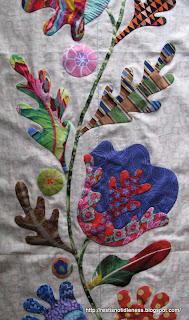 I found it better to select all the fabrics for the flowers and leaves over one or two days, 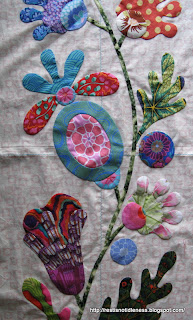 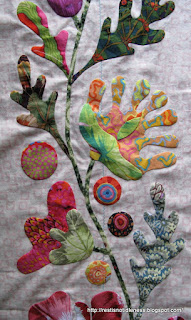 to pick the right fabric for each flower and leaf, it also
helps if the fabric is spread out all over the sewing room floor :) 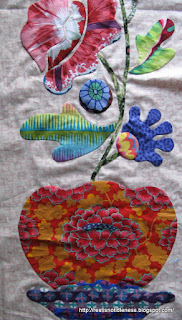 
Both of these borders are now complete and I am working on the Left Hand side one now, the finish line is getting closer now, tomorrow I'll post photos of the Right Hand side border. 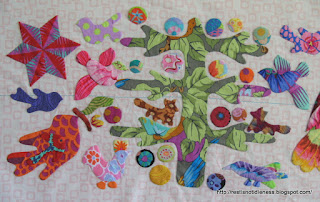 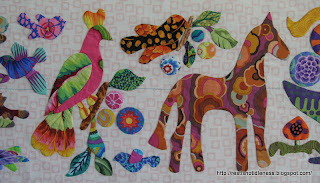 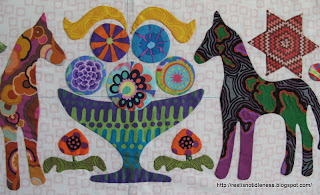 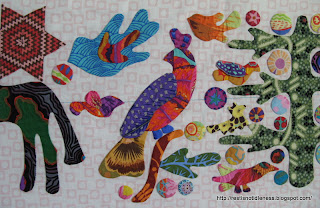 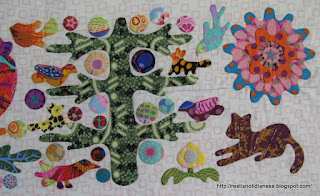 I found a photo of another Flower Garden quilt  here, you will need to scroll down a bit before you see it.
Posted by Pip at 3:41 PM 2 comments:

I've been working very hard recently, this quilt has to be finished by end of October (and by finished I mean quilted as well)

It has taken me at least twelve hours to do the applique on this part of the top border, not including the preparation of the pieces.  When I started this quilt I tried out a few different applique techniques, I found that I didn't like traditional needleturn and preferred to use the front basting method (as described here) although I hand baste the fabric in place as I find it easier to unpick hand stitching than machine stitching. 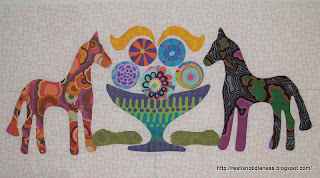 Of late though, I have been using turned edge, whole unit hand applique over a semi-soluble fusible (Floriani Stitch and Wash)  and am finding this much kinder on my hands. Regardless of which method I use there is still a lot of preparation involved and I find it easier to spend a day or so choosing fabrics and getting the pieces ready and then a couple of days on the applique, and repeat, sometimes it feels like Groundhog Day :)
Posted by Pip at 5:00 PM 4 comments:

Email ThisBlogThis!Share to TwitterShare to FacebookShare to Pinterest
Labels: Flower Garden, Kim McLean, Top Border
Older Posts Home
Subscribe to: Posts (Atom)
If you are a shop owner wishing to purchase Kim McLean's patterns, I suggest you visit the Glorious Color website and make contact with Liza Prior Lucy the shop owner.